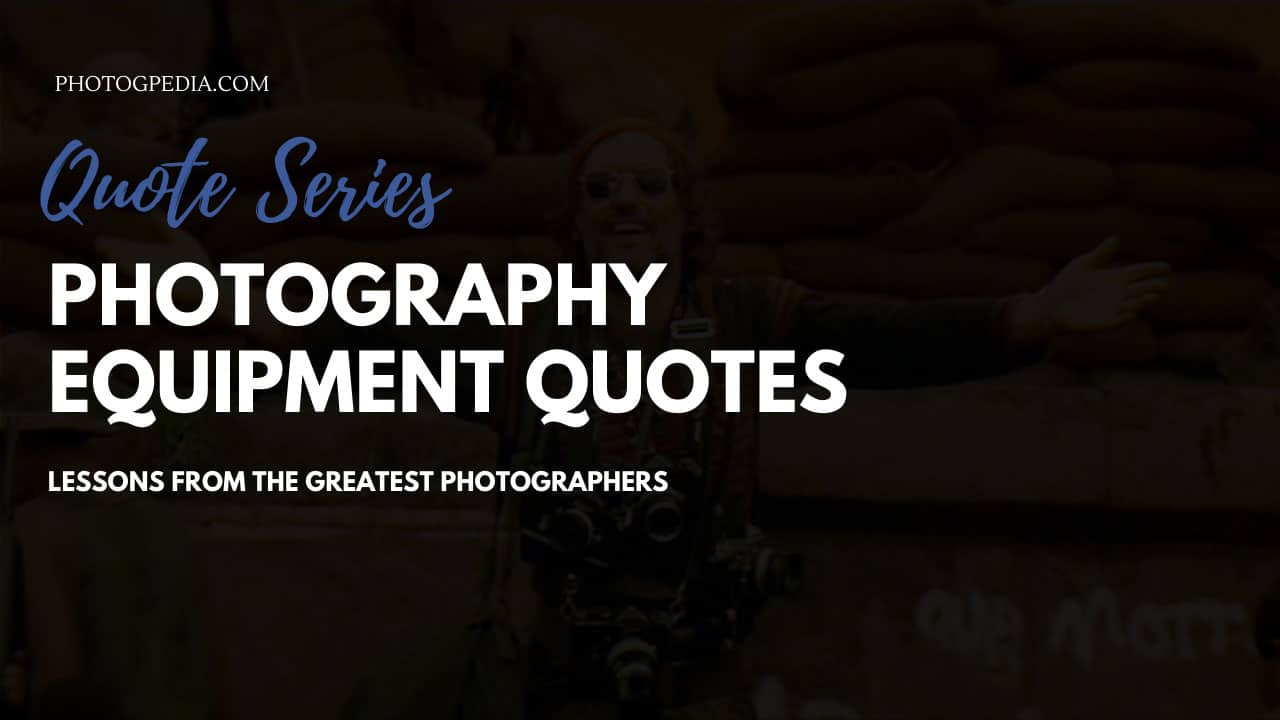 If you’re looking for photography equipment quotes or suffering from the dreaded Gear Acquisition Syndrome, then here are over 20 of the best quotes from famous photographers on the subject of camera gear.

Need some more inspiration or help on overcoming G.A.S.? Check out our dedicated article on the subject: The Ultimate Guide to Overcoming Gear Acquisition Syndrome

I am completely and have always been uninterested in the photographic process. I like the smallest camera possible, not those huge reflex cameras with all sorts of gadgets. When I am working, I have an M3 because it’s quicker when I’m concentrating.

A camera alone does not make a picture. To make a picture you need a camera, a photographer and above all a subject. It is the subject that determines the interest of the photograph.

What makes photography a strange invention is that its primary raw materials are light and time.

If I had to give advice to other photographers, I would first suggest quickly getting over the camera equipment questions. In my humble opinion, the make and format of a camera is ultimately low on the priority scale when it comes to making pictures.

All those professional guys who like to come with five tripods and six suitcases to do a picture, so they look professional? I was always trying to find a way to shoot more accidentally or lighter, not forcing everyone to hold still in front of the tripod. I can’t do the tripod thing anymore.

I use four cameras, five lenses, one flash, one Polaroid – it all fits in a suitcase weighing 17 kilograms and allows me to remove any photo anywhere and under any conditions.

There is only you and your camera. The limitations in your photography are in yourself, for what we see is what we are.

Light makes photography. Embrace light. Admire it. Love it. But above all, know light. Know it for all you are worth, and you will know the key to photography.

A portrait is not made in the camera but on either side of it.

Look and think before opening the shutter. The heart and mind are the true lens of the camera.

It’s not the camera that makes a good picture, but the eye and the mind of the photographer.

At the beginning, people laughed at me because I was using snappies. Sometimes, a celebrity would look at my camera and go, “Oh, I’ve got one of those.” I’d feel like handing it to them and saying, “Well, you take the pictures then.” But I like using snapshot cameras because they’re idiot-proof. I have bad eyesight, and I’m no good at focusing big cameras.

There are photographic fanatics, just as there are religious fanatics. They buy a so-called candid camera… there is no such thing: it’s the photographer who has to be candid, not the camera.

[the small camera] taught me energy and decisiveness and immediacy… The large camera taught me reverence, patience, and meditation.

Memorable photographs have been made with the simplest of cameras using available light.

l can use anything from a 10×8-inch camera to a photo booth. The most important thing is to get my message across.

If the photographer is interested in the people in front of his lens, and if he is compassionate, it’s already a lot. The instrument is not the camera but the photographer.

I hate cameras. They are so much more sure than I am about everything.

The best zoom lens is your legs.

Amateur photographers have got a problem because they’ve got no reason to take a picture. They’re kind of equipment junkies. When you look at a picture that Cartier-Bresson took on a 50mm…

A telephoto lens is all right for animals or sport but too intrusive for people who are unaware. If you want a close-up view you should move yourself if it is possible. The trouble is that so many photographers seem afraid to move in.

Skill in photography is acquired by practice and not by purchase.

I think a lot of the time these days people are so concerned about having the right camera and the right film and the right lenses and all the special effects that go along with it, even the computer, that they’re missing the key element. That element is developing a style that’s yours and experimenting with it until you eventually discover what makes sense to you.

Photography is a psychological state of mind, not how many pixels there are or how sharp the lens is. You need to have a secret and you have to be able to photograph your secret. That’s how your reputation will be made.

If I have any ‘message’ worth giving to a beginner it is that there are no shortcuts in photography.

I don’t think about what camera I should use that much. I just pick up the one that looks nicest on the day.

F11 is F11 no matter what camera or media you’re using.

Technically, I have not changed very much. Ask my assistants. They’ll tell you, I am the easiest photographer to work with. I don’t have heavy equipment. I shoot with a 35mm Canon and work out of one bag . Ninety-percent of the time it’s on automatic. I even use the flash that’s on the camera. It’s really an amateur’s equipment.

The important thing is not the camera but the eye.

Craft is important, but cameras for their own sake are not. A sense of aesthetics, a connection with the subject matter, an enquiring, and an inquisitive mind, these factors outweigh whatever equipment we use.

I myself have always stood in the awe of the camera. I recognize it for the instrument it is, part Stradivarius, part scalpel.

The camera mostly [gets] in the way. If I could do what I want with my eyes alone, I would be happy. Then when I get it on paper, on the negative, if there was something in the eyes when I took the picture, then when I look at the print, there are things that I can do to emphasize that. But when I’m used to an approach, it becomes like a person that I have no response to.

…it does seem to me that Capa has proved beyond all doubt that the camera need not be a cold mechanical device. Like the pen, it is as good as the man who uses it. It can be the extension of mind and heart…

The fact is that relatively few photographers ever master their medium. Instead they allow the medium to master them and go on an endless squirrel cage chase from new lens to new paper to new developer to new gadget, never staying with one piece of equipment long enough to learn its full capacities, becoming lost in a maze of technical information that is of little or no use since they don’t know what to do with it.

Having and camera makes you no more a photographer than having a hammer and some nails makes you a carpenter.

…It is important to have the right equipment for the purpose at hand and which is compatible with your own personality. It is possible to insert a screw with a hammer but the job is a lot more efficient with a screwdriver, preferably a power-driver!

You don’t ask a writer what typewriter he uses.

I used the wide-angle lens as a normal lens. I had no philosophy about it. When I looked in the viewfinder and realized I could see all the contradictions and confusion that was there with the wide-angle—that was what was great.

The last time I changed my camera was 50 years ago. All I need is a good face and the right light.

Limit your tools, focus on one thing, and just make it work… you become very inventive with the restrictions you give yourself.

The camera is much more than a recording apparatus, it is a medium via which messages reach us from another world.

With photography, everything is in the eye and these days I feel young photographers are missing the point a bit. People always ask about cameras but it doesn’t matter what camera you have. You can have the most modern camera in the world but if you don’t have an eye, the camera is worthless. Young people know more about modern cameras and lighting than I do. When I started out in photography I didn’t own an exposure meter – I couldn’t, they didn’t exist! I had to guess.

I am always surprised when I see several cameras, a gaggle on lenses, filters, meters, et cetera, rattling around in a soft bag with a complement of refuse and dust. Sometimes the professional is the worst offender!