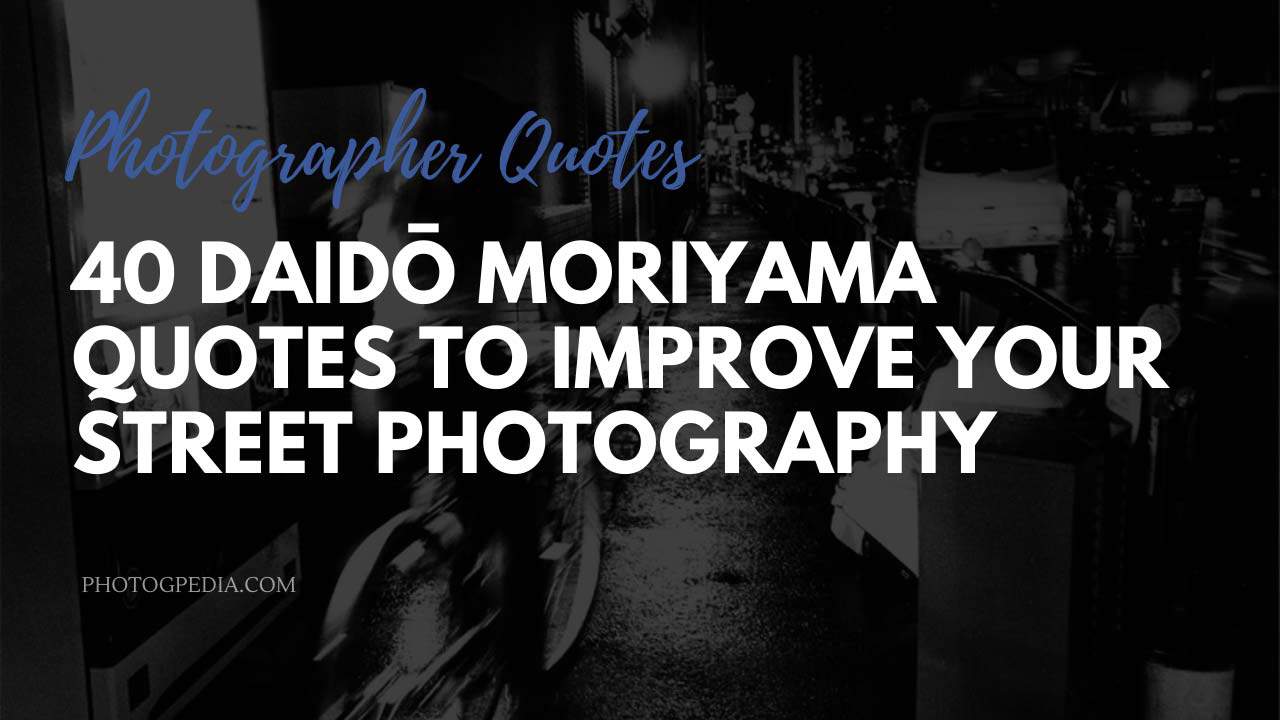 Looking for the best Daido Moriyama quotes? You’ve come to the right place. Below we have compiled a list of our favorite quotes from the master of the street to inspire you and help take your photography to the next level.

If you haven’t done so already, we recommend reading our Daido Moriyama master profile article to learn more about his photography style, techniques, cameras and much more.

Photography is the act of fixing time, not of expressing the world. The camera is an inadequate tool for extracting a vision of the world or of beauty.

I use the camera as a procedure by which continually to affirm my identity, asking myself: “What is the meaning of life in a world and among human beings as grotesque, scandalous, and accidental as the one in which I live and those with whom I interact?”

Nowadays, people take photos casually. Especially of their daily lives. The casual attitude toward photography is the same as mine. There is nothing right or wrong.

People steadily lose the landscapes they have accumulated. It’s not likely that anyone can faithfully recall how scenes appeared ten or twenty years ago… I think people continue to live in the present because we forget most every little thing.

Although photography is called an art, the photograph is not a tableau , born of nothing; it is not something unique, like a painting or a sculpture or the productions of the other arts. It is rather like an optical machine developed to such a point that nowadays even a cat can take photos.

I do not try to find myself in what I “shoot,” but perhaps I want to see the position of the world I am in.

I wanted to go to the end of photography.

Daido Moriyama Quotes on his Style

My photos are often out of focus, rough, streaky, warped, etc. But if you think about it, a normal human being will in one day perceive an infinite number of images, and some of them are focused upon, others are barely seen out of the corner of one’s eye.

For me, capturing what I feel with my body is more important than the technicalities of photography. If the image is shaking, it’s OK, if it’s out of focus, it’s OK. Clarity isn’t what photography is about.

I want to take a lot of Nasty photos.

I’ve never felt that I should conform to any particular set of rules.

Making a definitive declaration of intent or meaning kills the photograph.

Most of what I want simply slips away like water flowing through a net, and always what remains are only vague, elusive fragments of images… that sink into countless strata in my mind.

The photographer who attempts to fit happily into the world by using the traditional perspective of the camera will end up falling into the hole of the “idea” he has dug for himself.

Moriyama on his Process

When I go out into the city, I have no plan. I walk down one street, and when I am drawn to turn the corner into another, I do. Really, I am like a dog: I decide where to go by the smell of things, and when I am tired, I stop

I basically walk quite fast. I like taking snapshots in the movement of both myself and the outside world. When I walk around, I probably look like a street dog because after walking around the main roads, I keep wandering around the back streets.

Most of my photographs are taken on the street, of objects on the street. I want to capture the relationship between objects and people.

It may look like I’m just pointing the camera at what’s in front of me. But I’m trying to photograph what people see, but don’t notice – something that’s mysterious and unknown in everyday life.

When I take photographs, my body inevitably enters a trancelike state. Briskly weaving my way through the avenues, every cell in my body becomes as sensitive as radar, responsive to the life of the streets… If I were to give it words, I would say: “I have no choice… I have to shoot this… I can’t leave this place for another’s eyes… I have to shoot it… I have no choice.” An endless, murmuring refrain.

For me, photographs are taken in the eye before you’ve even thought what they mean. That’s the reality I’m interested in capturing.

I admit that photography can capture reality effectively and in detail, viewing a part of the world through its cold, scientific lens rather than with the eyes. But I prefer taking photographs without looking through the viewfinder.

I brush aside words and ideas, and focus on photography as a means of expressing a message that is both psychological and phenomenological. Without that framework, my approach is very simple – there is no artistry. I just shoot freely. For example, most of my snapshots I take from a moving car, or while running, without the finder, and in those instances one might say that I’m taking the pictures more with my body than with my eyes.

Most of my work, whether shot in Japan or abroad, is made on the street. I like to photograph the cities I visit and the people I encounter there.

In those days, you never saw anyone out on the streets with a camera around their neck. I felt like I was doing something really way out and original. I never imagined I’d end up doing it – essentially living on the streets – for the next few decades.

I was so touched and provoked by Klein’s photo book, that I spent all my time on the streets of Shinjuku [one of Tokyo’s wards], mixing myself in with the noise and the crowds, doing nothing except clicking, with abandon, the shutter of the camera.

Japan was moving fast, and we wanted to reflect that in our work.

The first thing I always tell anyone who asks me for advice is: Get outside. It’s all about getting out and walking. That’s the first thing. The second thing is, forget everything you’ve learned on the subject of photography for the moment, and just shoot. Take photographs – of anything and everything, whatever catches your eye. Don’t pause to think. That’s the advice I give people.

You have to have desire. That desire the photographer must feel in the instant he takes the shot. If you don’t have desire, you won’t see what’s there. I’m talking about the desire you feel in that moment when you see something that compels you to take your shot – it could be a woman, or anything. Desire is all around us; there’s a huge, limitless supply of it. It’s important to be true to that desire. To take a photograph that is at all interesting or meaningful, you must become one with that desire when you press the shutter button…

I don’t ever think about what people are going to think looking at my photographs. There are many things I can’t control. That viewers see the photographs in a different way is really important, but it doesn’t influence the work. My message enters the image, but I think it’s good if many messages enter the image, not just mine.

There isn’t much difference between photographing in color or black-and-white.

For me, photography is not the endeavor to create a two-dimensional work of art, but by taking photo after photo, I come closer to truth and reality at the very intersection of the fragmentary nature of the world and my own personal sense of timeFor me, photography is not a means by which to create beautiful art, but a unique way of encountering genuine reality at the point where the enormous fragments of the world – which I can never completely embrace by taking photos – coincide with my own inextricable predicament. –

If you were to ask me to define a photograph in a few words, I would say it is “a fossil of light and time.”

Photographs are pieces of the everlasting world – daily life – and fossils of light and time. They are also fragments of presentiment, inspiration, record, and memory about human beings and their history, as well as another language and world that becomes visible and intelligible through objectifying reality by means of cameras. They show us beauty and tenderness and also ugliness and cruelty now and then, not as the answer but always as a new question. I believe photographs to be pieces of an incomplete jigsaw puzzle. Which is why I have been and will be devoted to photography.

I realized later in the darkroom when I printed the image how amazing the dog’s expressionis. Snapshots are all about an instant moment and this dog instantly became a part of me. I am actually honored to be compared with that dog.

Language is a direct medium and communicates meaning and intention straight. A photograph, on the other hand, is subject to the viewer’s memory, aesthetics, and feelings – all of which affect how the photograph is seen.

A photograph… isn’t conclusive the way language is. But that’s what makes photography interesting. There’s no point in making photographs that use language in an expository way.

If an image is good, it is brought back to life by the feelings of the viewer.

Have a favorite Daido Moriyama quote from the list? Let us know in the comment section below.

To learn more about the master of street photography, we recommend reading our Daido Moriyama profile article. To see more of Moriyama’s incredible work, check out his image archive at the Tate Museum website.

Looking for more words of wisdom from master photographers? Take a look at the quotes section of Photogpedia for more great photography quotes.