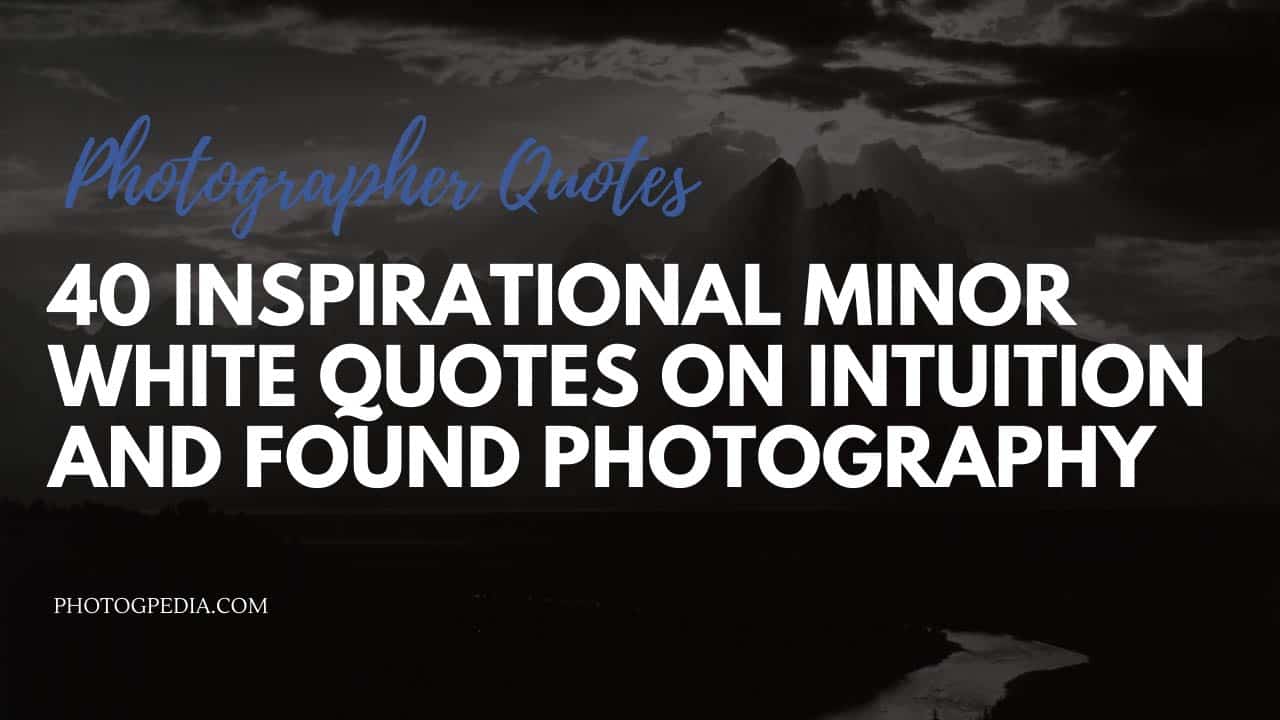 Minor White (1908–1976) was a photographer and teacher best known for his black-and-white photography that captures the spiritual essence of a scene.

White’s work is characterized by its simplicity, deep feeling for nature, and love for abstract photography. His haunting images are often described as mystical or ethereal and are filled with metaphors that challenge us to think about our world differently.

White’s photographic style was formed during his exchanges with Edward Weston, Alfred Stieglitz, and Ansel Adams. His conversations with Stieglitz, in particular, spurred his “meditations” about photography as a way to translate visual form into what he called the “suprasensual.”

For White, the photograph was a “mirage” and the camera was a “metamorphosing machine.”

White was also a founding member and editor of Aperture magazine, and from 1953 to 1957 he was the curator of exhibitions at the International Museum of Photography at George Eastman House.

Below, we have listed 40 of our favorite Minor White quotes to inspire and help advance your photography skills.

Photography is a language more universal than words.

The spring-tight line between reality and photography has been stretched relentlessly, but it has not been broken. These abstractions… have not left the world of appearances; for to do so is to break the camera’s strongest point – its authenticity.

When I look at pictures I have made, I have forgotten what I saw in front of the camera and respond only to what I am seeing in the photographs.

At first glance a photograph can inform us. At second glance it can reach us.

Let the subject generate its own photographs. Become a camera.

How astounding is camera! With its unique ability to register continuous value or tone, camera can sanctify even the ugly and the dead, clarify the ordinary, and, in a moment, turn a hundred-and-eighty degrees to play iconoclast.

When gifts are given to me through my camera, I accept them graciously.

Camera and eye are together a time machine with which the mind and human being can do the same kind of violence to time and space as dreams.

I have often photographed when I am not in tune with nature but the photographs look as if I had been. So I conclude that something in nature says, ‘Come and take my photograph.’ So I do, regardless of how I feel.

Often while traveling with a camera we arrive just as the sun slips over the horizon of a moment, too late to expose film, only time enough to expose our hearts.

I seek out places where it can happen more readily, such as deserts or mountains or solitary areas, or by myself with a seashell, and while I’m there get into states of mind where I’m more open than usual. I’m waiting, I’m listening. I go to those places and get myself ready through meditation. Through being quiet and willing to wait, I can begin to see the inner man and the essence of the subject in front of me… Watching the way the current moves a blade of grass – sometimes I’ve seen that happen and it has just turned me inside out.

To see through, not merely with, the eye, to perceive with the inner eye, and by an act of choice to capture the essence of that perception. This is the very core of the creative process.

The state of mind of a photographer while creating is a blank… For those who would equate “blank” with a kind of static emptiness, I must explain that this is a special kind of blank. It is a very active state of mind really, a very receptive state of mind, ready at an instant to grasp an image, yet with no image pre-formed in it at any time. We should note that the lack of a pre-formed pattern or preconceived idea of how anything ought to look is essential to this blank condition. Such a state of mind is not unlike a sheet of film itself – seemingly inert, yet so sensitive that a fraction of a second’s exposure conceives a life in it. (Not just life, but “a” life).

One should not only photograph things for what they are but for what else they are.

While we cannot describe its appearance (the equivalent), we can define its function. When a photograph functions as an equivalent, we can say that at that moment, and for that person the photograph acts as a symbol or plays the role of a metaphor for something that is beyond the subject photographed.

No matter how slow the film, spirit always stands still long enough for the photographer It has chosen.

To get from the tangible to the intangible… a paradox of some kind has frequently been helpful. For the photographer to free himself of the tyranny of the visual facts upon which he is utterly dependent, a paradox is the only possible tool. And the talisman paradox for unique photography is to work ‘‘the mirror with a memory’’ as if it were a mirage, and the camera a metamorphosing machine, and the photograph as if it were a metaphor… Once freed of the tyranny of surfaces and textures, sub-stance and form can use the same to pursue poetic truth.

A sequence of photographs is like a cinema of stills. The time and space between photographs is filled by the beholder, first of all from himself, then from what he can read in the implications of design, the suggestions springing from treatment, and any symbolism that might grow from within the subject itself.

Before he has seen the whole, how unusually perceptive and imaginative the person must be to evolve the entire sequence by meditating on its single, pair, or triplet of essential images.

Sequences originate for me from some hidden place. Though I habitually play photographs against each other, or words against images in pairs, triplets, or rows of four with expectations of magic, sequences originate from within. And I prefer to let them. In fact I cannot seriously do otherwise than photograph on impulse and let whatever words will, flow spontaneously.

To engage a sequence we keep in mind the photographs on either side of the one in our eye.

In putting images together I become active, and excitement is of another order – synthesis overshadows analysis.

It is curious that I always want to group things, a series of sonnets, a series of photographs; whatever rationalizations appear, they originate in urges that are rarely satisfied with single images.

Before he has seen the whole, how unusually perceptive and imaginative the person must be to evolve the entire sequence by meditating on its single, pair, or triplet of essential images.

The Photo as a Self-Portrait

When I looked at things for what they are I was fool enough to persist in my folly and found that each photograph was a mirror of myself.

…all photographs are self-portraits.

Be still with yourself until the object of your attention affirms your presence.

The photographer projects himself into everything he sees, identifying himself with everything in order to know it and to feel it better.

There’s no particular class of photograph that I think is any better than any other class. I’m always and forever looking for the image that has spirit! I don’t give a damn how it got made.

Creativity with portraits involves the invocation of a state of rapport when only a camera stands between two people… mutual vulnerability and mutual trust.

Very often I try to find something that matches a feeling I have. On the other hand, a lot of times I photograph with nothing specific in mind. I just play it as it comes. If it’s good, fine. I find ‘letting it happen’ relaxing, a playful vacation. Stimulating pictures almost always result.

The secret, the catch, and power lies in being able to use the forms and shapes of objects in front of the camera for their expressive-evocative qualities… the ability to see the visual world as the plastic material for the photographer’s expressive purposes.

Sometimes we work so fast that we don’t really understand what’s going on in front of the camera. We just kind of sense that, ‘Oh my God, it’s significant!’ and photograph impulsively while trying to get the exposure right. Exposure occupies my mind while intuition frames the images.

Have a favorite Minor White quote from the list? Let us know in the comment section below.

To learn more about Minor White’s photography, visit his archive on the Princeton website.