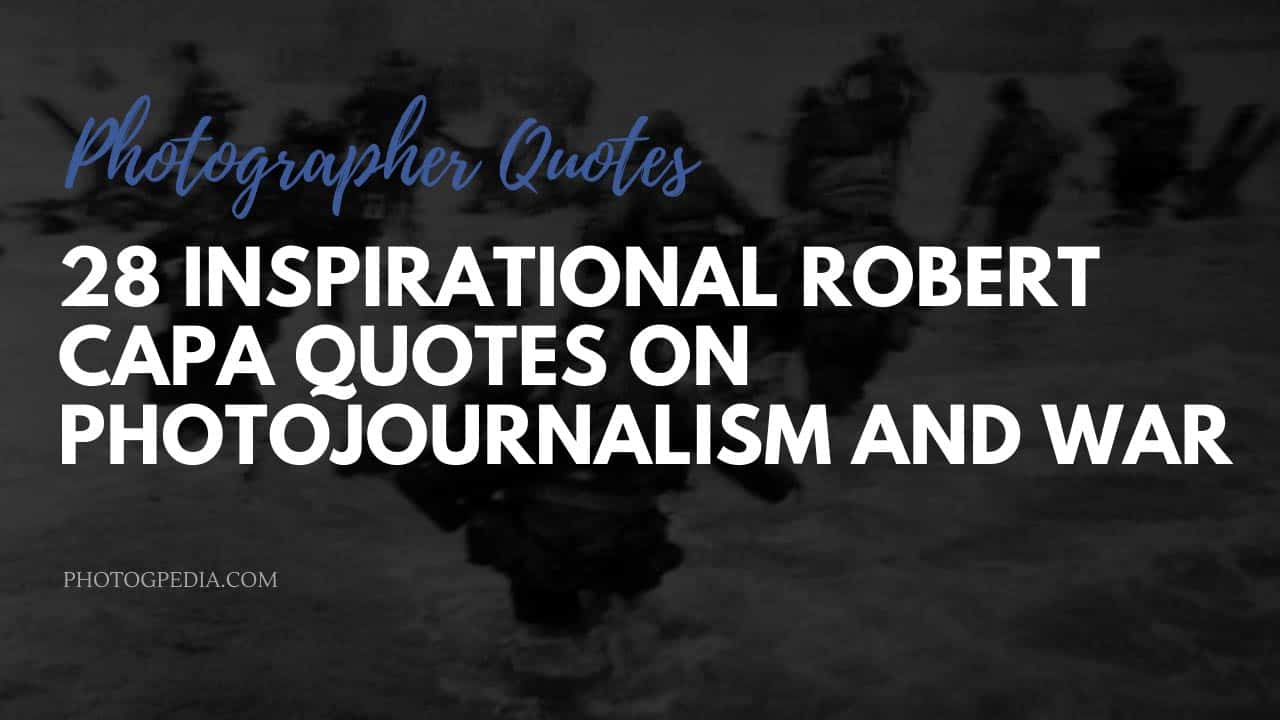 Few photographers of the last century have had such a broad and lasting influence as Robert Capa. In his short life, Capa took some of the greatest photographs of all time and established a reputation as one of the masters of photojournalism.

Below, we’ve compiled a list of our favorite Robert Capa Quotes that are guaranteed to inspire, motivate and help you take your photography to the next level. Hopefully you’ll learn more about the legendary photographer and his remarkable photography as well.

While pursuing my studies, my parents means gave out, and I decided to become a photographer, which was the nearest thing to journalism for anyone who found himself without a language.

Like the people you shoot and let them know it.

I had a name which was a little bit different from Bob Capa. The real name of mine was not too good [Andre Friedman]. I was just as foolish as I am now, but younger. I couldnt get any assignment. I needed a new name badlyAnd then I invented that Bob Capa was a famous American photographer who came over to Europe and did not want to bore French editors because they did not pay enough. So I just moved in with my little Leica, took some pictures and wrote Bob Capa on it which sold for double prices.

Listen, old goat, today doesn’t matter and tomorrow doesn’t matter. It’s the end of the game that counts and how many chips you’ve got in your pocket, if you’re still playing.

It’s not enough to have talent, you also have to be Hungarian.

If you call yourself an artist, you won’t get anything published. Call yourself a photojournalist, and then you can do whatever you want.

Watch out for labels. They are reassuring but somebody’s going to stick one on you that you’ll never get rid of – “the little surrealist photographer.” You’ll be lost – you’ll get precious and mannered. Take instead the label of “photojournalist” and keep the other thing for yourself, in your heart of hearts.

Rober Capa’s advice to Henri Cartier-Bresson in the 1930s

You don’t have to pose your camera. The pictures are there, and you just take them. The truth is the best picture, the best propaganda.

Writing the truth being so obviously difficult, I have in the interests of it allowed myself to go sometimes beyond and slightly this side of it. All events and persons in this book are accidental and have something to do with the truth.

If your pictures aren’t good enough, you’re not close enough.

Robert Capa photographed countless battles and five wars, starting with the Spanish Civil War in 1936, and finishing with the French Indochina War in 1954, where he sadly lost his life, after stepping on a land mine. There are few photographers that have photographed War with greater bravery or more intense passion as Capa.

For a war correspondent to miss an invasion is like refusing a date with Lana Turner.

The [concentration camps] were swarming with photographers and every new picture of horror served only to diminish the total effect. Now, for a short day, everyone will see what happened to those poor devils in those camps; tomorrow, very few will care what happens to them in the future.

War is like an aging actress: more and more dangerous and less and less photogenic.

It’s not easy always to stand aside and be unable to do anything except record the suffering around one. The last day some of the best ones die. But those alive fast forget.

In a war you must hate somebody or love somebody, you must have a position or you cannot stand what goes on.

I would say that the war correspondent gets more drinks, more girls, better pay, and greater freedom than the soldier, but at this stage of the game, having the freedom to choose his spot and being allowed to be a coward and not be executed for it is his torture.

I hope to stay unemployed as a war photographer till the end of my life.

Robert Capa Quotes – at the end of World War II

On 6th June 1944, Capa waded ashore on the beaches of Normandy, with his two Contax cameras. Below are several quotes taken from Capa’s book Slightly Out of Focus which describe his experience that day.

The war correspondent has his stake, his life, in his own hands and he can put it on this horse or that horse, or he can put it back in his pocket at the very last minute. I am a gambler. I decided to go in with Company E in the first wave.

My beautiful France looked sordid and uninviting, and a German machine gun, spitting bullets around the barge, fully spoiled my return. The men from my barge waded in the water. Waist-deep, with rifles ready to shoot, with the invasion obstacles and the smoking beach in the background – this was good enough for the photographer. I paused for a moment on the gang plank to take my first real picture of the invasion.

It was still very early and very gray for good pictures, but the gray water and the gray sky made the men, dodging under the surrealistic designs of Hitler’s anti-invasion brain trust, very effective.

I crawled on my stomach over to my friend Larry, the Irish padre of the regiment, who could swear better than any amateur. He growled at me,”You damn half-Frenchy!If you didn’t like it here, why the hell did you come back?” Thus comforted by religion, I took out my second Contax camera and began to shoot without raising my head.

The next shell fell even closer. I didn’t dare to take my eyes off the finder of my Contax and frantically shot frame after frame. Half a minute later, my camera jammed – my roll was finished. I reached in my bag for a new roll, and my wet, shaking hands ruined the roll before I could insert it in my camera.

I paused for a moment… and then I had it bad. The empty camera trembled in my hands. It was a new kind of fear shaking my body from toe to hair, and twisting my face.

The water was cold and the beach still a hundred yards away. The bullets tore holes in the water around me, and I made for the nearest steel obstacle. A soldier got there at the same time, and for a few minutes we shared its cover.

The rip tide hit my body and every wave slapped my face under my helmet. I held my cameras high over my head… and told myself, “I am just going to dry my hands on that boat.”

… put fresh film in both cameras. I got up on deck again in time to take one last picture of the smoke covered beach… An invasion barge came alongside… the transfer of the badly wounded in the heavy seas was a difficult business. I took no more pictures, I was busy lifting stretchers.

Capa took that invasion barge back to England and was the first photographer to return with pictures. After sending his film by courier for processing, he returned on the first available boat to Normandy.

I put my films in the press bag, changed my clothes, and returned to the beach head a few hours later on the first available boat. Seven days later, I learned that the pictures I had taken on “Easy Red” were the best of the invasion. But the excited darkroom assistant, while drying the negatives, had turned on too much heat and the emulsions had melted and rundown before the eyes of the London office. Out of one hundred and six pictures in all, only eight were salvaged. The captions under the heat-blurred pictures read that Capa’s hands were badly shaking.

When Capa’s photos were published around the world, they caused a sensation. Despite these images being blurry, they remain some of the most important photographs ever taken.

What he left behind is the story of his unique voyage and a visual testimony affirming his own faith in humankind’s capacity to endure and occasionally to overcome.

Cornell Capa, 1999 – Introduction to Slighly Out of Focus

What Camera Did Robert Capa Use

Capa started off with a Leica IIIa before switching to a Contax II camera with a Carl Zeiss Jena Sonnar 5cm f/2 lens. He also used a Rolleiflex. In addition to the Contax he also used a Nikon S with a 50mm for his later work. His prefered lens choice was a 50mm.

Have a favorite Robert Capa quote from the list? Let us know in the comment section below.

To learn more about Robert Capa and to see more of her remarkable photography, check out his image archive on Magnum’s website.

Photogpedia is a participant in the Amazon Services LLC Associates Program.