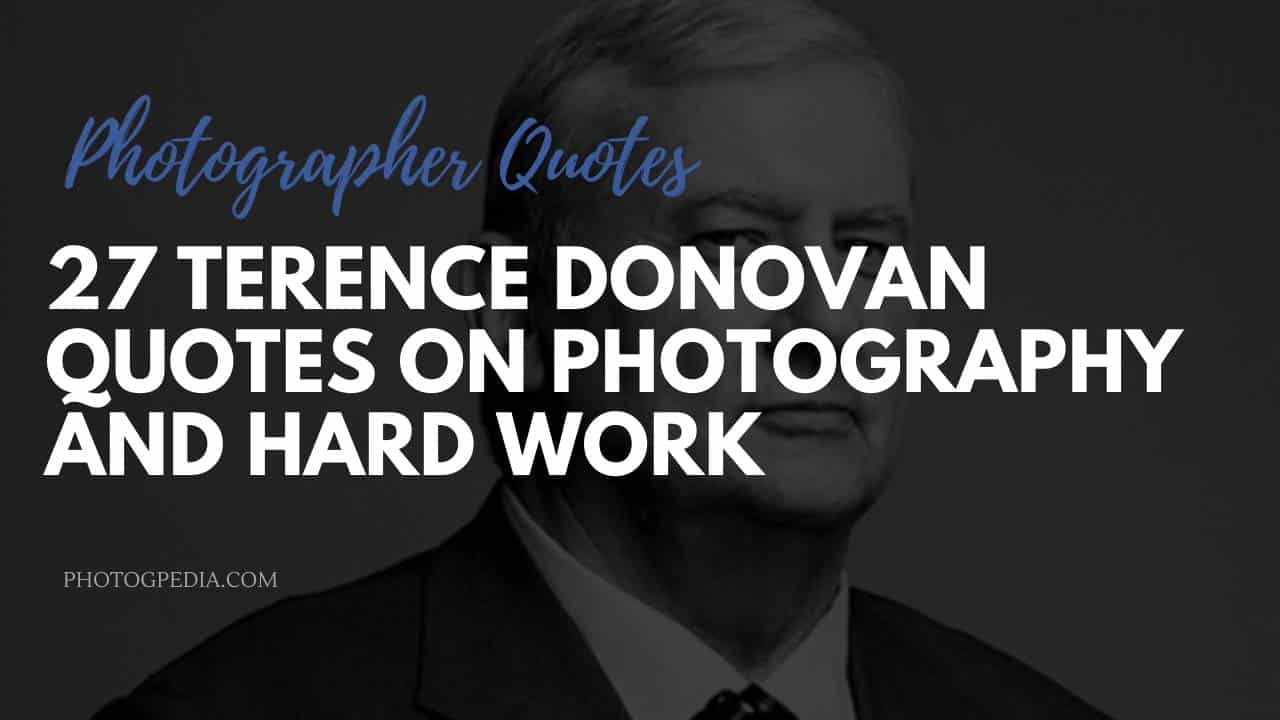 Looking for the best Terence Donovan quotes? You’ve come to the right place. Below we’ve listed 27 of the British photographers best quotes to inspire you and help take your photography to the next level.

If you haven’t done so already, we recommend reading our Terence Donovan master profile article to learn more about his brilliant fashion and portrait photography, techniques, cameras and much more.

When I first started, I thought that if I took enough frames, I’d get a good picture. Photographs are taken with the brain, the camera records it, but it’s a meta-physical process because what happens in an image is beyond what you see. And the problem with amateurs is that they’re too busy with the technical side. It’s the head that makes pictures and the cameras record the thought. You’ve got to be able to read the images.

When you’re young, you go on assignment, somebody steams into your pictures and it tears your guts out, you know. And you defend them. I don’t defend my work, never again. I hope you like it, I’ve tried hard. I’ve tried my best but if you don’t like it…

The problem for an amateur is that they have no reason to take a photograph.

I was a blockmaker, making printing plates and it taught me the fundamentals of exposure. On any film shoot, in any situation, within reason, I’m never more than a stop out. I can look at anybody’s face and say, 1/30 at 2.8. And if I am out, it will be a stop over, which is always the right way to be. And that was all from that training.

You have to make it look easy when you’re photographing people; have a dialogue going. You can’t hide behind your camera. When I was 15, I was shy, so I used to make myself go up to people to photograph them. I’d do anything that frightened me. And now I say to young photographers, ‘Don’t try and sneak pictures on a 100mm lens, get a 35 on and walk up to them.’

[On immitators] Look at them, running off 90 rolls of film in the hope that one of them will have a picture on it. Not one of them has seen the inside of a darkroom and most of the buggers don’t know how to load a fucking camera.

I’ve tried to keep my eyes and ears open in my life, be a bit receptive. That’s why I go and photograph where all those kids are dancing. It’s interesting. Too many people of my age are too locked off. You can look old, but you don’t have to be old. [Norman] Parkinson was 73 but he was not an old man, he was a wild man, sparky.

There’s a lot of difference between an advertising photographer and a photographer. When I used to work for Elle magazine in France, the art director never told me what to do. You had to work it out for yourself. In Paris, there was Helmut Newton in one studio and Guy Bourdin in the other. They’re photographers, man. They weren’t nicking anything off of anybody. I watched Guy Bourdin and there’s no more way I could take a photograph like Guy than fly…

When I did my 900th interview about that Robert Palmer video Addicted to Love someone asked me where I got the idea from and I said, ‘I did something rather odd… I thought of it!’ It seems to be a rather old-fashioned thing to do.

I used to get up at eight o’clock, work in the studio from nine until seven at night, go out and have a bite, come back at nine, develop all the negatives of the day, contact them and go home at 1.30. That’s how you learn how to do the job. You know what they say in the SAS, ‘Train hard, fight easy’.

Photography is a militaristic operation; you’ve got to be organised. Most people aren’t organised.

Then a few weeks later I was at the Royal College of Art and after I’d studied their work in the morning, we had some lunch and then sat down to talk. And then a girl got up and I said, ‘Where are you going?’ And she said, ‘To get coffee.’ So, I said, ‘You’ve just had lunch.’ And then the German next to me said, ‘Zis isn’t ze military now you know.’ And so I said, ‘And you can f*ck off as well!’ But do you see what that illustrates?”

What you’ve got to understand about Bailey and me is, we were fantastically hard working. Bailey and I never wanted to be successful photographers. That wasn’t the plot. We weren’t ambitious, ever. We just wanted to do it.

My first darkroom was a cupboard and I couldn’t afford a red light, so I used to have a bit of cloth handy and the cloth used to catch fire. But by God I wanted to do it.

You’ve got to try hard not to develop the vague notion you might be of some consequence. ‘Cos if you manage that, you’re free from the tyranny of it. You see that a million times, people that really think they’ve cracked it and then it comes slamming out of the woodwork at them. Judo teaches you that, some skinny little bloke you think, Oh, he’s nothing and the next thing you’re lying on your back. It’s much more to do with the philosophy of life than anything to do with photography.

You don’t do something like this for money. I’ve never met anyone who’s succeeded in life purely because they wanted the cash.

Donovan on Art and Photography

Photography, for me, isn’t art. It’s specific. You can have things in photographs that are emotive, a crying child by a car crash or something, but that’s not the photograph, that’s the content that’s emotive.

Because I paint and take photographs, I think photography is a craft because it doesn’t attack you. That’s why I don’t have many exhibitions. I think exhibitions are quite dull, personally. I don’t know why. I like photographs. I like looking at them but how many times have you come out of an exhibition and gone, Phew!?

When old Avedon had that exhibition of stuff, you know, 15 foot high prints, well it was just graphics to me, and the weakness of graphics is it’s studied. Whereas if you look at a painting by Lucien Freud, skilled as it is, there’s a bit of mad vibrancy about it all. Or Bacon, insanity on the paper, but I love it because I don’t know where it came from and it mystifies me.

Serious musicians like to hear their music played on LP as opposed to CD. Whoever’s in charge of the show upstairs, he’s got a wicked sense of humour because as they give it to you, the progress and new ideas, they take something away. You know what I mean?

Amateur photographers have got a problem because they’ve got no reason to take a picture. They’re kind of equipment junkies. When you look at a picture that Cartier-Bresson took on a 50mm…

Don’t buy a Hasselblad unless you have a tripod and an assistant. If you drop the magazine, it tends to be embarrassing, like trying to spoon up your guacamole in Acapulco. When I see a Hampstead gynaecologist on holiday festooned with a Hasselblad and lenses and no tripod, I know he is a photographer wanker.

You can’t stop technology; you don’t want to stop technology. But if you get one of these advanced modern cameras and you’re photographing a girl in a black suit against a black background you’d better switch everything off and get out the meter and take a reading. If you don’t do that, old love, you’re snookered because most of those guys that design cameras, one thing they never do is use them.

Have a favorite Terence Donovan quote from the list? Let us know in the comment section below.