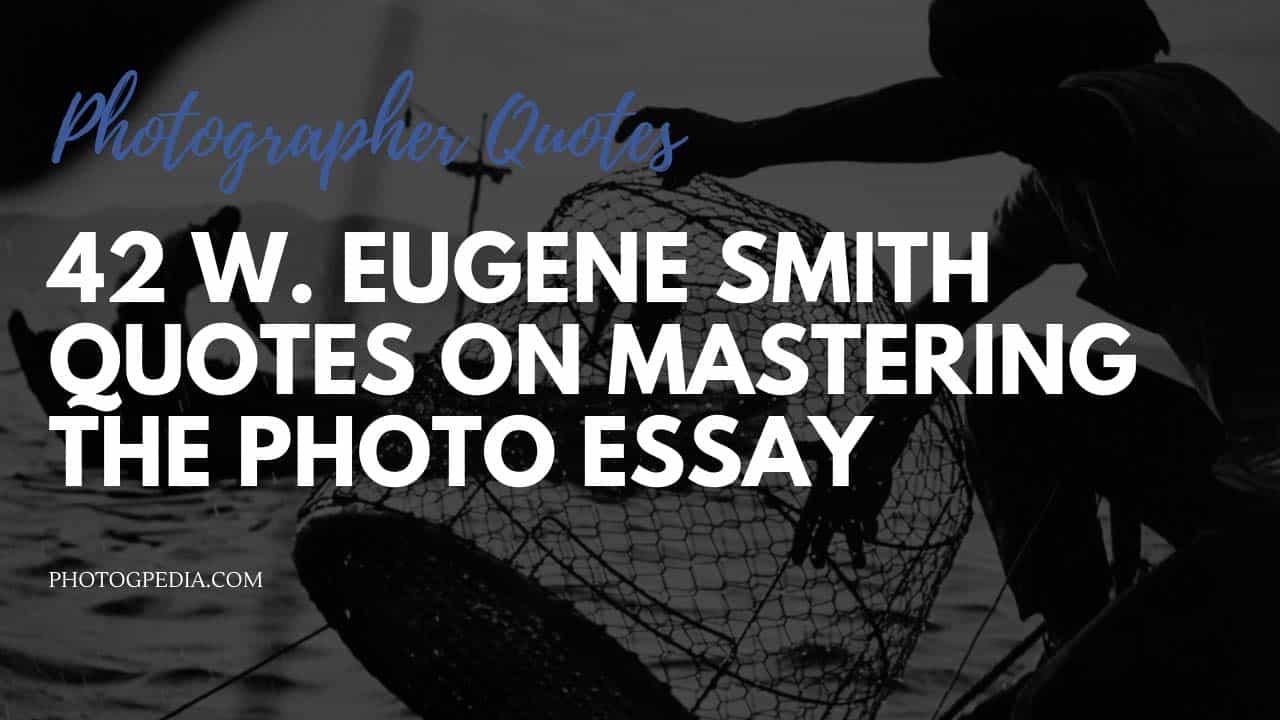 Looking for the best W. Eugene Smith quotes? Then you’ve come to the right place. Below we’ve listed 42 of our favorite quotes from one of the greatest photojournalists and a master of the photo-essay form to help take your photography to the next level.

Never have I found the limits of the photographic potential. Every horizon, upon being reached, reveals another beckoning in the distance. Always, I am on the threshold.

My pictures are complex and so am I.

I can’t stand these damn shows on museum walls with neat little frames, where you look at the images as if they were pieces of art. I want them to be pieces of life!

My camera, my intentions stopped no man from falling. Nor did they aid him after he had fallen. It could be said that photographs be damned for they bind no wounds. Yet, I reasoned, if my photographs could cause compassionate horror within the viewer, they might also prod the conscience of that viewer into taking action.

A photo is a small voice, at best, but sometimes – just sometimes – one photograph or a group of them can lure our senses into awareness. Much depends upon the viewer; in some, photographs can summon enough emotion to be a catalyst to thought.

I think photojournalism is documentary photography with a purpose.

Photographic journalism, because of the tremendous audience reached by publications using it, has more influence on public thinking and opinion than any other branch of photography. For these reasons, it is important that the photographer-journalist has (beside the essential mastery of his tools) a strong sense of integrity and the intelligence to understand and present his subject matter accordingly.

Many claim I am a photographer of tragedy. In the greater sense I am not, for though I often photograph where the tragic emotion is present, the result is almost invariably affirmative.

I try to take what voice I have and I give it to those who don’t have one at all.

Humanity is worth more than a picture of humanity that serves no purpose other than exploitation.

… to became neighbours and friends instead of journalists. This is the way to make your finest photographs.

I think the only thing wrong with the word “documentary” is that it can give some people the idea that you can make absolutely dull pictures of the ingredients of something instead of the heart of something.

To have his photographs live on in history, past their important but short lifespan in a publication, is the final desire of nearly every photographer-artist who works in journalism. He can reach this phase only by combining a profound penetration into the character of the subject with a perfection of composition and technique – a consolidation necessary for any photographic masterpiece.

Quotes on Capturing the Truth

The journalistic photographer can have no other than a personal approach; and it is impossible for him to be completely objective. Honest -yes. Objective – no.

The first word I would remove from the folklore of journalism is the word objective.

With considerable soul searching, that to the utmost of my ability, I have let truth be the prejudice.

I am constantly torn between the attitude of the conscientious journalist who is a recorder and interpreter of the facts and of the creative artist who often is necessarily at poetic odds with the literal facts.

I am an idealist. I often feel I would like to be an artist in an ivory tower. Yet it is imperative that I speak to people, so I must desert that ivory tower. To do this, I am a journalist—a photojournalist. But I am always torn between the attitude of the journalist, who is a recorder of facts, and the artist, who is often necessarily at odds with the facts. My principle concern is for honesty, above all honesty with myself.

Up to and including the moment of exposure, the photographer is working in an undeniably subjective way. By his choice of technical approach, by the selection of the subject matter… and by his decision as to the exact cinematic instant of exposure, he is blending the variables of interpretation into an emotional whole.

I bear in mind that I have to have an opener and closer. Then I make a mental picture of how to fill in between these two. Sometimes, at the end of the day, I’ll lie in bed and do a sketch of the pictures I already have. Then I’ll decide what pictures I need. In this way, I can see how the job is shaping up in the layout form.

[I would list the picture to take, and other things to do. It began with a beginning, but it was a much tighter and more difficult problem at the end. I’d say, ‘Well, she has this relationship to that person. I haven’t shown it. How can I take a photograph that will show that? What is this situation to other situations?’

Here it becomes really like a playwright who must know what went on before the curtain went up, and have some idea of what will happen when the curtain goes down. And along the way, as he blocks in his characters, he must find and examine those missing relationships that five the validity of interpretation to the play.]

I don’t think a picture for the sake of a picture is justified – only when you consider the purpose. For example, I photographed a woman giving birth, for a story on a midwife. There are at least two gaps of great pictures in my pictures.

I have personally always fought very hard against ever packaging a story so that all things seem to come to an end at the end of a story. I always want to leave it so that there is a tomorrow. I suggest what might happen tomorrow – at least to say all things are not resolved, that this is life, and it is continuing.

The Importance of Emotion

Most photographers seem to operate with a pane of glass between themselves and their subjects. They just can’t get inside and know the subject.

I’ve never made any picture, good or bad, without paying for it in emotional turmoil.

The purpose of all art is to cause a deep and emotion, also one that is entertaining or pleasing. Out of the depth and entertainment comes value.

What uses having a great depth of field, if there is not an adequate depth of feeling?

I didn’t write the rules – why should I follow them? Since I put a great deal of time and research to know what I am about? I ask and arrange if I feel it is legitimate. The honesty lies in my – the photographer’s – ability to understand.

[I crop ] for the benefit of the pictures. The world just does not fit conveniently into the format of a 35mm camera.

In music I still prefer the minor key, and in printing I like the light coming from the dark. I like pictures that surmount the darkness, and many of my photographs are that way. It is the way I see photographically. For practical reasons, I think it looks better in print too.

[on why he prints his own pictures] The same reason a great writer doesn’t turn his draft over to a secretary… I will retouch.

Negatives are the notebooks, the jottings, the false starts, the whims, the poor drafts, and the good draft but never the completed version of the work… The print and a proper one is the only completed photograph, whether it is specifically shaded for reproduction, or for a museum wall.

When a good picture comes along, I shoot it. Later I may find a better variation of the same shot, so I shoot all over again.

Available light is any damn light that is available!

Since I am somewhat adequate as a photographer, I remain with it.

Halsmann: What if nobody sees [the work]? Besides a few friends?

Smith: Answer this and you will see how artists have acted throughout the bloody ages. The goal is the work itself.

An artist must be ruthlessly selfish.

Passion is in all great searches and is necessary to all creative endeavors.

Have a favorite W. Eugene Smith quote from the list? Let us know in the comment section below.

Don’t forget to bookmark this page, or print it out, and refer to it next time you need some inspiration. Like the article? Share it with other photographers.

To learn more about W. Eugene Smith’s photography, check out his photographer profile on Magnum’s website.