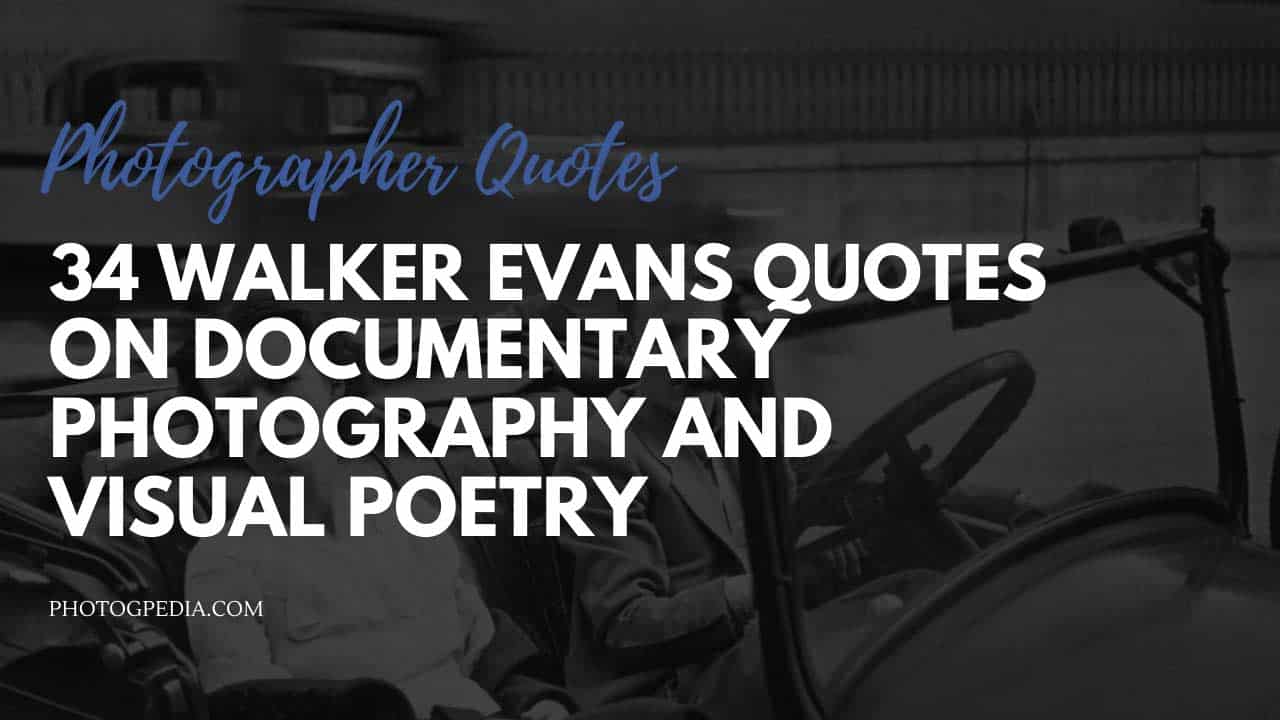 Looking for the best Walker Evans quotes? Then you’ve come to the right place. Below we’ve listed 34 timeless quotes from one of America’s most influential photographers to inspire, motivate and help take your photography to the next level.

I used to try to figure out precisely what I was seeing all the time, until I discovered I didn’t need to. If the thing is there, why, there it is.

Leaving aside the mysteries and the inequities of human talent, brains, taste, and reputations, the matter of art in photography may come down to this: it is the capture and projection of the delights of seeing; it is the defining of observation full and felt.

Experience is very important. It comes only with time. I have time behind me so I venture to teach and say to students, “I don’t really know a hell of a lot more than you do except I’ve been around longer and I do have experience and if I can articulate it some of it will rub off and do you some good.” When I didn’t have experience that’s one thing I learned, that I needed it. It comes – talking to an experienced man is something; it’s not the same as having it but it’s better than not.

The meaning of quality in photography’s best pictures lies written in the language of vision. That language is learned by chance, not system; … our overwhelming formal education deals in words, mathematical figures and methods of rational thought, not in images.

With the camera, it’s all or nothing. You either get what you’re after at once, or what you do has to be worthless. I don’t think the essence of photography has the hand in it so much. The essence is done very quietly with a flash of the mind, and with a machine. I think too that photography is editing, editing after the taking. After knowing what to take, you have to do the editing.

The secret of photography is, the camera takes on the character and personality of the handler.

As a boy I had a cheap little camera and I had gone through the hobby photography experience developing film in the bathroom and so on. And I think it came from painters. Several of my friends were painters. And I had a visual education that I had just given myself.

When I first made photographs, they were too plain to be considered art and I wasn’t considered an artist. I didn’t get any attention at all. The people who looked at my work thought, well, that’s just a snapshot of the backyard. Privately I knew otherwise and through stubbornness stayed with it…

I began to wonder – I knew I was an artist or wanted to be one – but I was wondering whether I really was an artist. I was doing such ordinary things that I could feel the difference. Most people would look at those things and say, ‘Well, that’s nothing. What did you do that for? That’s just a wreck of a car or a wreck of a man. That’s nothing. That isn’t art.’ They don’t say that anymore.

I think I was photographing against the style of the time, against salon photography, against beauty photography, against art photography. I was doing non-artistic and non- commercial work. I felt – and it’s true – I was on the right track. I sensed that I was turning new ground. At least I though I was mining a new vein, sort of instinctively knowing it but not in any other way aware of it.

Detachment, lack of sentimentality, originality, a lot of things that sound rather empty. I know what they mean. Let’s say, “visual impact” may not mean much to anybody. I could point it out though. I mean it’s a quality that something has or does not have. Coherence. Well, some things are weak, some things are strong…

First of all, I tell [students] that art can’t be taught, but that it can be stimulated and a few barriers can be kicked down by a talented teacher, and an atmosphere can be created which is an opening into artistic action. But the thing itself is such a secret and so unapproachable.

It is easy to imagine fantasy as physical and myth as real. We do it almost every moment. We do this as we dream, as we think, and as we cope with the world about us. But these worlds of fantasy that we form into the solid things around us are the source of our discontent. They inspire our search to find ourselves.

Lettering and signs are very important to me. There are infinite possibilities both decorative in itself and as popular art, as folk art, and also as symbolism and meaning and surprise and double meaning. It’s a very rich field… I think in truth I’d like to be a letterer. And then broadly speaking I’m literary. The sign matters are just a visual symbol of writing.

Whether he is an artist or not, the photographer is a joyous sensualist, for the simple reason that the eye traffics in feelings, not in thoughts.

I work rather blindly. I have a theory that seems to work with me that some of the best things you ever do sort of come through you. You don’t know where you get the impetus and response to what’s before your eyes.

[On composition] I don’t think very much about it consciously, but I’m very aware of it unconsciously, instinctively. Deliberately discard it every once in a while not to be artistic. Composition is a schoolteacher’s word. Any artist composes. I prefer to compose originally, naturally rather than self-consciously. Form and composition both are terribly important. I can’t stand a bad design or a bad object in a room. So much for form. That way it’s placed is composition… when you stop to think about what an artist is doing one question is, what is the driving force, the motive?”

Stare. It is the way to educate your eye, and more. Stare, pry, listen, eavesdrop. Die knowing something. You are not here long.

It’s easy to photograph light reflecting from a surface, the truly hard part is capturing the light in the air.

I don’t believe in manipulation, if that’s what you mean, of any photographs or negatives. To me it should be strictly straight photography and look like it; not be painterly ever.

…nature photographs downright bore me for some reason or other. I think: ‘Oh, yes. Look at that sand dune. What of it?’

Photography is not cute cats, nor nudes, motherhood or arrangements of manufactured products. Under no circumstances it is anything ever anywhere near a beach.

I say half jokingly that photography is the most difficult of the arts. It does require a certain arrogance to see and to choose. I feel myself walking on a tightrope instead of on the ground.

I’m sometimes called a ‘documentary photographer’ but… a man operating under that definition could take a sly pleasure in the disguise. Very often I’m doing one thing when I’m thought to be doing another.

Documentary: That’s a sophisticated and misleading word. And not really clear… The term should be documentary style… You see, a document has use, whereas art is really useless.

The photographs are not illustrative. They, and the text, are coequal, mutually independent, and fully collaborative. By their fewness, and by the importance of the reader’s eye, this will be misunderstood by most of that minority which does not wholly ignore it. In the interests, however, of the history and future of photography, that risk seems irrelevant, and this flat statement necessary.

Interviewer: Do you think it’s possible for the camera to lie?
Walker Evans: It certainly is. It almost always does.

What I believe is really good in the so-called documentary approach to photography is the addition of lyricism. This quality is usually produced unconsciously and even unintentionally and accidentally by the cameraman.

Incidentally, part of a photographer’s gift should be with people. You can do some wonderful work if you know how to make people understand what you’re doing and feel all right about it, and you can do terrible work if you put them on the defense, which they all are at the beginning. You’ve got to take them off their defensive attitude and make them participate.

I never took it upon myself to change the world. And those contemporaries of mine who were going around falling for the idea that they were going to bring down the United States government and make a new world were just asses to me.

It’s too presumptuous and naïve to think you can change society by a photograph or anything else… I equate that with propaganda; I think that’s a lower rank of purpose.

Have a favorite Walker Evans quote from the list? Let us know in the comment section below.

Don’t forget to bookmark this page, or print it out, and refer to it next time you need some inspiration. If you’ve found the article helpful, then we would be grateful if you could share it with other photographers.

To see more of Evans’s incredible photography, check out the Walker Evans image archive at the Museum of Modern Art.