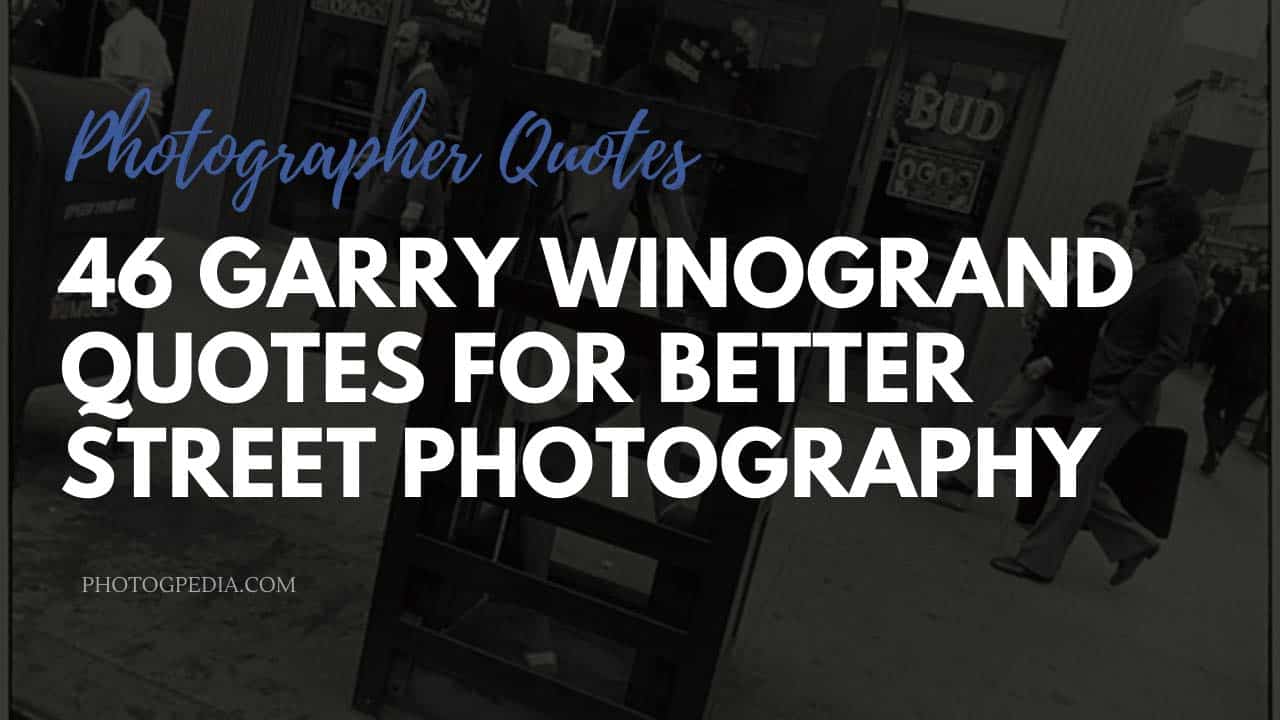 Looking for the best Garry Winogrand quotes? Then you’ve come to the right place. Below we have listed 46 Winogrand quotes to inspire you and help take your photography to the next level.

If you haven’t done so already, we recommend reading our Garry Winogrand master profile article to learn more about the prolific street photographers work, techniques, cameras and much more.

I photograph to see what things look like photographed.

I like to think of photographing as a two-way act of respect. Respect for the medium by letting it do what it does best, describe. And respect for the subject by describing it as it is. A photograph must be responsible to both.

I look at the pictures I have done up to now, and they make me feel that who we are and how we feel and what is to become of us just doesn’t matter. Our aspirations and successes have been cheap and petty. I can only conclude that we have lost ourselves…

The photo is a thing in itself. And that’s what still photography is all about.

My only interest in photographing is photography.

The contest between form and content is what, is what art is about – it’s art history. That’s what basically everybody has ever contended with. The problem is uniquely complex in still photography.

And a friend of mine at that time, I was talking to him about it – a guy named Dan Weiner. I don’t know if you know his name. He’s dead now. [He] asked me if I had ever seen …Walker Evans’ book and I said, no. I had never heard of Walker Evans. He said, if you’re going around the country, take a look at the book. And he did me a big fat favor.

Photography is about finding out what can happen in the frame. When you put four edges around some facts, you change those facts.

It’s the easiest thing in the world to do that, to make successful photographs. It’s a bore.

Frame in terms of what you want to have in the picture, not about making a nice picture, that anybody can do.

No one moment is most important. Any moment can be something.

Every photograph is a battle of form versus content. The good ones are on the border of failure.

[If I saw something in my viewfinder that looked familiar to me, I would] do something to shake it up.

The photograph should be more interesting or more beautiful than what was photographed.

When I’m photographing, I don’t see pictures, I see faces.

You have a lifetime to learn technique. But I can teach you what is more important than technique, how to see; learn that and all you have to do afterwards is press the shutter.

I look at a photograph. What’s going on? What’s happening, photographically? If it’s interesting, I try to understand why.

A photographer’s responsible for two things. Once you put your body where you want it to be, what’s in the frame and when you snap the shutter. That’s what the photographer does. The camera does the rest.

I certainly never wanted to be a photographer to bore myself. It’s no fun – life is too short.

Sometimes I feel like the world is a place I bought a ticket to. It’s a big show for me as if it wouldn’t happen if I wasn’t there with a camera.

You see something happening and you bang away at it. Either you get what you saw or you get something else and whichever is better you print.

No, the only thing that’s difficult is reloading when things are happening. Can you get it done fast enough?

Well, I’m not going to get into that. I think that those kind of distinctions and lists of titles like “street photographer” are so stupid. I’m a photographer, a still photographer. That’s it.

I think it’s a stupid term, “street photography.” I don’t think it tells you anything about the photographer or work. On the subject, I have a book out called the animals. Call me the same – I’m a “zoo photographer.” I mean it all really doesn’t make any sense to me, you know?

Winogrand on Narration and Projects

Let’s say that what’s out there is a narrative. Often enough, the picture plays with the question of what actually is happening. Almost the way puns function.

All I’m doing is photographing. When I was working on The Animals, I was working on a lot of other things too. I kept going to the zoo because things were going on in certain pictures. It wasn’t a project.

For me the true business of photography is to capture a bit of reality (whatever that is) on film…if, later, the reality means something to someone else, so much the better.

I really try to divorce myself from any thought of possible use of this stuff. That’s part of the discipline. My only purpose while I’m working is to try to make interesting photographs, and what to do with them is another act – a alter consideration. Certainly while I’m working, I want them to be as useless as possible.

Photos have no narrative content. They only describe light on surface.

I think that there isn’t a photograph in the world that has any narrative ability… They do not tell stories – they show you what something looks like. To a camera.

A photo is a literary narrative, ya know what I mean… but it’s not specific.

I don’t have anything to say in any picture. My only interest in photography is to see what something looks like as a photograph. I have no preconceptions.

What photograph isn’t a still life?

Language is basic to all of our existences in this world. We depend on it.

I develop my own film. And I work in spurts. I pile it up.

I have a good friend who’s a very good printer. And he does a certain amount of printing for me. I do all the developing. If somebody’s going to goof my film, I’d better do it. I don’t want to get that mad at anybody else.

You make better choices if you approach your contact sheets cold, separating the editing from the picture taking as much as possible.

You know, I really don’t think you learn from teachers. You learn from work. I think what you learn, really, is how to be you have to be your own toughest critic, and you only learn that from work, from seeing work.

The primary problem is to learn to be your own toughest critic. You have to pay attention to intelligent work, and to work at the same time. You see. I mean, you’ve got to bounce off better work. It’s matter of working.