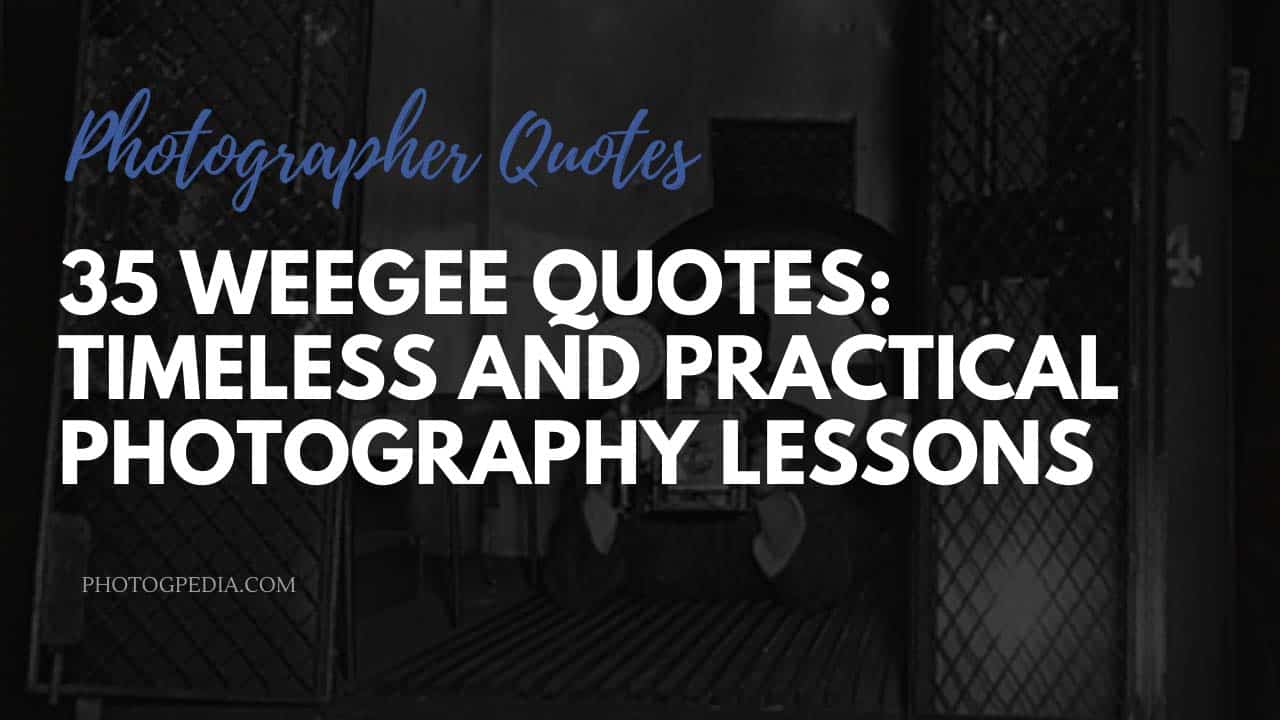 Looking for the best Weegee quotes? You’ve come to the right place. Below we put together a list of 35 quotes from the master of the street to inspire you and help take your photography to the next level.

If you haven’t done so already, we recommend reading our Weegee master profile article to learn more about his incredible photos of 50s New York, photography style, techniques and much more.

It’s like a modern Aladdin’s Lamp, you rub it and, in this case, the camera, you push the button and it gives you the things you want. News photography teaches you to think fast, to be sure of yourself, self-confidence. When you go out on a story, you don’t go back for another sitting. You gotta get it.

I can take a camera and paint with it. Nobody has exhausted the possibilities of the camera.

A photographer is like a painter. Instead of a canvas, he uses film… instead of brushes he uses a lens… and instead of paint, he uses light.

However, [my type of photography] captures a dramatic moment in life. It does the impossible by making time stand still… it freezes an emotion, an event… on film. It’s as if you reached out and caught the very breath of life and preserved it for all time. Most wonderful of all, it has the power to recreate the entire emotional experience many years later.

People always ask me, “What is the best picture you ever took?” Without hesitation, I answer, “A picture I took at the opening of the Metropolitan Opera House.” I consider this to be my masterpiece.

I once photographed and did a story on Stieglitz, truly a great photographer. And we started talking about things and he said, ahh… he said “Something happens, it’s a thousandth part of a fleeting second. It’s up to the photographer to capture that on film, because like a dying day, the thing will never come back again.

Many photographers live in a dream world of beautiful backgrounds. It wouldn’t hurt them to get a taste of reality to wake them up.

For me, a photograph is a page from life, and that being the case, it must be real.

I have always been asked, “Weegee, how do you manage to get that lifelike quality in your pictures?” “Very simply,“ I’d reply. “I see a good picture and I snap it.”

To me, pictures are like blintzes – ya gotta get ’em while they’re hot.

Every time I heard a sigh or a groan in the dark, I pushed the button.

There’s one more secret ingredient that should go into a photo – ATTITUDE… this makes the difference between an ordinary photograph and a great one.

A picture of a tramp sitting on a park bench can be very interesting… sometimes. This also applies to a picture of a man in high hat and tails. But-snap them both on the same park bench, and you have one of the most forceful, ironical features in photography… contrast.

There was another photographer there, and he made what they call a ten foot shot. He made a shot of just a guy laying in the doorway, that was it. To me, this was drama, this was like a backdrop. I stepped back all the way about a hundred feet, I used flash powder, and I got this whole scene: the people on the fire escapes, the body, everything. Of course the title for it was “Balcony Seats at a Murder.” That picture won me a gold medal with a real genuine diamond, so that was it.

When you find yourself beginning to feel a bond between yourself and the people you photograph when you laugh and cry with their laughter and tears, you will know you are on the right track… Good luck.

So, keep your eyes open. If you see anything, take it. Remember – you’re as good as your last picture. One day you’re hero, the next day you’re a bum…

For the pictures… I was on the scene; sometimes drawn there by some power I can’t explain, and I caught the New Yorkers with their mask off… not afraid to laugh, cry or make love.

I covered all kinds of stories from Murder Incorporated to the opening of the opera to the Cinderella Ball at the Waldorf. In other words, you take everything in stride. The same camera that photographs a murder scene can photograph a beautiful society affair at a big hotel.

I will walk many times with friends down the street and they’ll say “Hey, Weegee. Here’s a drunk or two drunks laying on the gutter.” I take one quick look at that and say “They lack character.” So, even a drunk must be a masterpiece! I will ride around all night, or all year, looking for a good drunk picture

One of the most beautiful ones I got after riding around two years. Then I made my drunk picture. It was a guy on (Amsterdam avenue?) one Sunday morning about 5 o’clock, he was sleeping underneath a canopy of a funeral undertaking parlor. Now that tome was a picture. Of course the obvious title would be “Dead Drunk.”

There are photographic fanatics, just as there are religious fanatics. They buy a so-called candid camera… there is no such thing; it’s the photographer that has to be candid, not the camera.

People are so wonderful that a photographer has only to wait for that breathless moment to capture what he wants on film… and when that split second of time is gone, it’s dead and can never be brought back.

One just doesn’t go up to strange men, women, children, elephants, or giraffes and say, “Look this way, please. Laugh, cry – show some emotion or go to sleep underneath a funeral canopy.” They would have called me crazy and called a cop who would have called the wagon with the guys in white and I would have wound up in the psychopathic ward at Bellevue Hospital in a straitjacket.

Now the easiest kind of a job to cover is a murder because the stiff will be laying on the ground, he couldn’t get up and walk away or get temperamental, and he would be good for at least two hours.

I picked a story that meant something, in other words, names make news.

I was no longer glued to the Teletype machine at police headquarters. I had my wings. I no longer had to wait for crime to come to me; I could go after it. The police radio was my life line. My camera… my life and my love… was my Aladdin’s lamp.

Being a freelance photographer was not the easiest way to make a living. There had to be a good meaty story to get the editors to buy the pictures. A truck crash with the driver trapped inside, his face a crosscross of blood… a tenement house fire, with the screaming people being carried down the aerial ladder clutching their babies, dogs, cats, canaries, parrots, monkeys, and even snakes… a just-shot gangster, lying in the gutter, well dressed in his dark suit and pearl hat, hot off the griddle, with a priest, who seemed to appear from nowhere, giving him the last rites.

I had so many unsold murder pictures lying around my room…I felt as if I were renting out a wing of the City Morgue.

I’m no part-time dilettante photographer, unlike the bartenders, shoe salesmen, floor-walkers plumbers, barbers, grocery clerks, and chiropractors whose great hobby is their camera. All their friends rave about what wonderful pictures they take. If they’re so good, why don’t they take pictures full-time, for a living, and make floor walking, chiropractics, etc., their hobby? But everyone wants to play it safe. They’re afraid to give up their paychecks and their security they might miss a meal.

Remember… the field is wide open. Be original and develop your own style, but don’t forget above anything and everything else… be human… think… feel.

Now, for instance, say you have a camera, you make good pictures, everybody likes them. But you have to get out of the class where you’re only photographing your friends and relatives indoors. That’s very nice, but if you want to do it professionally, and I don’t see any reason why you shouldn’t, go out and photograph strangers. I know you’re afraid to do it at first, I was scared stiff myself, but you have to do it. And most people like to be photographed. They consider it an honor to be picked out of a big crowd. In other words, you can’t be a Nice Nellie and do photography.

I have no chips on my shoulder. I like to be constructive. As I have said, I have inspired many persons to take up photography. As a matter of fact, I inspire myself. (When I take a good picture I give myself a bonus.).

Sure. I’d like to live regular. Go home to a goodlooking wife, a hot dinner, and a husky kid. But I guess I got film in my blood. I love this racket. It’s exciting. It’s dangerous. It’s funny. It’s tough. It’s heartbreaking.

I am a perfectionist. When I take a picture, if it’s a murder or it’s a drunk, it has gotta be good.

Forget if it has been done before. Be yourself.